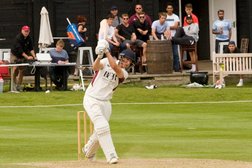 Hollman stars as England U19 beat South Africa by 9 wickets

Six wickets and valuable 45 for Luke help set up win

“Luke stood out in this game in terms of delivering his skill as a leg-spinner, and he’s dominated with the ball. He’s been outstanding”
Jon Lewis, Head Coach and ex England bowler

Big win for England in the first Youth Test at Scarborough. here is an extract from the ECB website –

Head coach Jon Lewis reserved his highest praise for Hollman and captain Tom Banton, whose 137 in the first innings proved the difference between the teams.
“The result looks convincing, but there were moments in the game where it was much closer than that,” said Lewis. “We won critical moments in the game – for instance our partnerships late in our first innings, with Jack Davies supporting Banton, and Hollman with the tail-enders.”
Hollman made 45, then the tall Middlesex leg-spinner added two for 30 to his four first-innings wickets. “He’s one of five lads who are 17 or under in this side, which is exciting,” added Lewis. “He’s stood out in this game in terms of delivering his skill as a leg-spinner, and he’s dominated with the ball. He’s been outstanding.”